One of the original jazz musicians, Louis Armstrong blew trumpet and "sticks" of marijuana during his storied career.

Born on Aug. 4, 1901 in New Orleans, Armstrong first smoked "gage" or "shuzzit" in his early 20s when he lived in Chicago. "We did call ourselves vipers," Armstrong explained in Max Jones and John Chilton's  Louis: The Louis Armstrong Story, 1900-1971, "which could have been anybody from all walks of life that smoked and respected gage. That was our cute little name for marijuana, and it was a misdemeanor in those days. Much different from the pressure and charges the law lays on a guy who smokes pot - a later name for the same thing... We always looked at pot as a sort of medicine, a cheap drunk and with much better thoughts than one that's full of liquor."

In 1931, Armstrong was taking a smoke break outside a Los Angeles club when two cops or "dicks" arrested him, making Armstrong the first celebrity to be busted for marijuana.

"I spent nine days in the Los Angeles City Jail," he recalled. "The judge gave me a suspended sentence and I went to work that night - wailed just like nothing happened. What strucked me funny though - I laughed real loud when several movie stars came up to the bandstand while we played a dance set. and told me, when they heard about me getting caught with marijuana they thought marijuana was a chick. Woo boy - that really fractured me!" 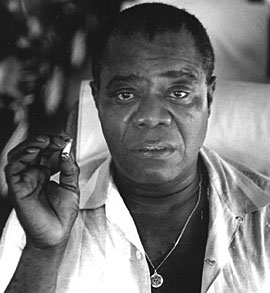 Armstrong famously wrote a letter to Pres. Eisenhower calling for him to legalize marijuana.

Armstrong playe trumpet and sang in as gravelly voice. His most famous songs include "West End Blues," "What a Wonderful World, "Hello Dolly and "Muggles" (another of his names for marijuana).

He died on July 6, 1971. For more, visit the Louis Armstrong House Museum in Corona, New York.