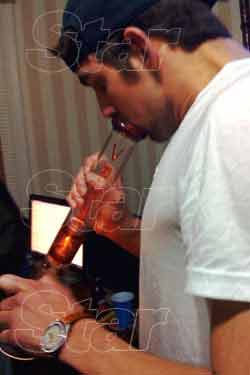 He may be the reluctant stoner, but Olympic swimming legend Michael Phelps has the support of marijuana users everywhere. Phelps' pot-smoking was being outed when his bong-hit seen round the world in 2009.

Born on June 30, 1985 in Baltimore, Phelps has competed in fve Olympics in swimming competition. After getting shut out in 2000, he won eight medals in Athens in 2004 - six gold and two bronze. Phelps topped that feat in Beijing in 2008, with eight gold medals in eight races, setting seven world records. In London in 2012, he held his own with four golds and two silvers, upping his overall medal total to an Olympic record 22 (18 gold, also a record). He has added three more gold medals at the Rio Games.

On Jan. 31, 2009, a photo taken on Nov. 5, 2008 of Phelps smoking a bong at a party in Columbia, South Carolina appeared in several tabloids and spread like a wildfire through the media. Phelps was quick to call his use of marijuana "bad judgement" and a "mistake." He was suspended for three months by USA Swimming and lost his Kellogg's sponsorship.

Phelps had a knack for getting into trouble. In 2004, he was arrested for DUI in Salisbury, Maryland; he paid a $250 fine and was placed on 18-months probation. Phelps was stopped and charged again in Maryland for DUI in 2014. He subsequently entered a treatment program for alcohol abuse.

Phelps is engaged to former Miss USA contestent Nicole Williams. They have a son named Boomer.